March was a more usual reading month for me, although I didn’t read as diversely as usual – lots of novels. The more I read, the harder it is to pick the three top books, but I like that. It makes me think more about what I’ve read, and forces me to articulate what it is that makes one book stand out over the others. 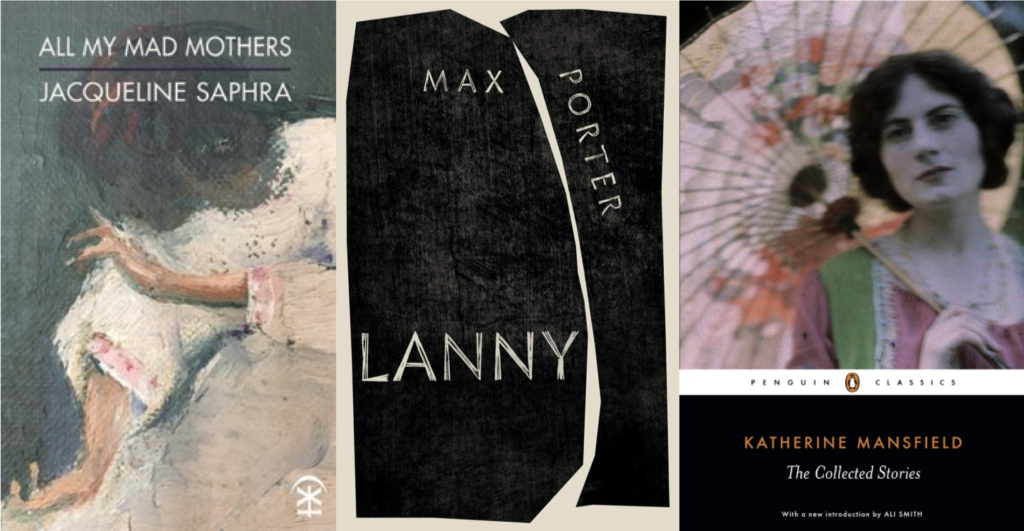 Best poetry: All my Mad Mothers, by Jacqueline Saphra. This decision was so hard, because I also read Raymond Antrobus’s The Perseverance, and honestly I almost had to flip a coin. Please read both! AMMM won by a nose, because although both are fantastic collections, I related to it more on a personal level. I’m quite late to this collection, it came out in 2017, but I’ve heard Saphra read from it more than once and have been meaning to pick it up for ages. Many of the poems are about motherhood, coming-of-age and family, some of my favourite topics. The collection includes some of the prose poems from her pamphlet If I Lay on my Back I saw Nothing but Naked Women, which are gloriously mad: ‘The desk is an heirloom. […] There are secret compartments in the back where I hide problematic words in case I need them later. Sometimes they whisper in the dark. At quiet moments, if I put my ear to the ink blotter, I hear the long ones mount the shorter ones.’ That glorious madness shows up all through the collection; consider the opening of ‘Virginity’: ‘Why not get it sorted in that lull / between O levels and results’, but there are moments of piercing awareness too, as in ‘The World’s Houses’, where girls learn that doors can be a boundary to set and boys learn that ‘every door is […] theirs for the casual slamming.’

Best Novel: Lanny, by Max Porter. No surprises here at all, I made a special trip to buy this the day it was released. In fact, I went up to a random stranger in America last year, who I saw was reading Grief is the Thing with Feathers, just to tell her that this book was coming out (she was excited too.) Because it was being described as a novel, I was a little bit worried that Lanny wouldn’t have the same oddness as GTWF, but it’s not really a novel. It’s not poetry either, it’s just its own self, as GTWF was. It’s the story of a boy called Lanny, who lives in a village in the commuter belt, and it’s about village life, and families, and adult/child friendship, and folklore and anguish. ‘It came the sound of a song, / warm on his creaturely breath, / and he snuggled against me, climbing up on my lap, / wrapping himself around my neck.’ I can’t think of how else to describe it, except to say that I adored it.

Best short: The Collected Stories of Katherine Mansfield. I’ve been reading this since November, actually, and in hindsight I wish I’d bought a selected edition or individual collections as the sheer bulk of this meant that it got dull at times. And these stories never deserve to be described as dull. I bought this because I read Public Library by Ali Smith and it made me interested, and I remembered that my mother liked Mansfield too. This edition has an introduction by Ali Smith and so that settled the choice. From the start, I loved Mansfield’s style. It’s vibrant, piercingly observant, and completely bonkers in places. Almost every story feels like a bucket of cold water has just been thrown over you. I was talking to my mother about it and she commented that ‘all the stories are so sad’, and she’s right, but I almost hadn’t noticed, because I was so caught up in the language. ‘Suddenly–dreadfully–she wakes up. What has happened? Something dreadful has happened. No– nothing has happened. It is only the wind shaking the house, rattling the windows, banging a piece of iron on the roof and making her bed tremble.’ (From ‘The Wind Blows’.) Mansfield was born in New Zealand and educated in Europe, she didn’t settle after returning home and came back to Europe. The stories are set everywhere, from small town NZ to London, Berlin, and European holiday destinations. They are all about people, all sorts of people, and usually the most fleeting of small everyday occurrences. She was a master of demonstrating how critical a seemingly unimportant event can be to the person most affected by it. ‘They only gave the blind a touch, but it flew up and the cord flew after, rolling around the blind-stick, and the little tassel tapped as if trying to get free. That was too much for Constantia.’ (From ‘The Daughters of the Late Colonel’.) Mansfield would definitely not be to everyone’s taste, and as I mentioned, even if you love her style it can get a bit overwhelming, but I thoroughly recommend you have a look at at least a couple of stories if you’ve never read her before.

That’s it – what have you read lately? What are you reading in April? Have you read any of these, or feel like you might?