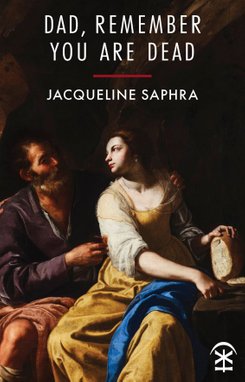 The hunt is on: through ashes, photographs
and lists, through bone and prayer, through violations
– from ‘Utterance’

Jacqueline Saphra’s previous collection All My Mad Mothers, was shortlisted for the T.S. Eliot Prize in 2017, and she returns with a stunning companion collection in which it is her father who takes centre stage. The poems in Dad, Remember You Are Dead explore a highly disturbing relationship and related themes of feminism, patriarchy and power. They are at times tender, at times shocking and difficult to read, and in every case beautifully wrought.

Poets often – some would say invariably – draw on their own experiences in their work. The reader must keep in mind, though, that the ‘I’ in a poem should not be taken to signify a literal interpretation of events. The cover information confirms that Saphra is referring to her relationship with her own father, but surrealism blurs the border between history and imagination here, and the poems drawing upon myth and on others’ experiences remind us that we are asked to consider everything in a much wider context than Saphra’s own personal experience.

The use of surrealism can also create a protective distance from a poem’s subject matter. In ‘To My Little Sister on the Shore’ the tide and the uncovered beach become a metaphor for nakedness and vulnerability, and the urge of an older sister to protect.

the tide’s tender crush
as when a bigger body

however damaged
throws itself
upon a smaller one

It’s a subtle image and could be missed if not for the surrounding poems in the collection which reinforce to us over and over that this book is about the power men have over girls, and how blatantly they can abuse it.

And that exercise of power does not end with death. A central theme of the collection is the creeping insistence, the unstoppable-ness, of the Father, even after he dies. He returns as the reek of a smoked kipper, as Japanese Knotweed, as the reaching, clutching hand of his Will. The book’s title is a line from ‘Dad and the Facts’, in which he is ‘leaking information’ as if ‘Dad’s click-hipped // great-gut skeleton / must teach me // a lesson’. The speaker is unable to silence the voice and by the end of the poem calls in frustration ‘stop it / Dad // remember you are dead.’ The ‘lesson’ we already know won’t be a kind one, it echoes to an earlier poem, ‘Lessons my Father Taught me’, in which a moment of defiance is quickly overcome by brute force. Another lesson appears later in the book: ‘The time he told you to jump and so you / jumped and instead of catching you, he / stepped away. That’ll teach you not to / trust anyone he said.’ I found myself wondering why the speaker in the poems would choose to attend the deathbed of such a father, but perhaps that experience is critical to the process of beginning to silence him.

This is not a heart-warming collection, it is powerful, and grotesque in places, it challenges and protests and is angry. But it isn’t depressing or wholly grim. In ‘My Father’s Parts’ the father begins: ‘One low-slung belly bulges against / the gates, spitting shirt buttons’ and ends as a set of yellow teeth trapped in a bathroom mug ‘grinding in / fluorescent light, sharpening themselves.’ He is gruesome, and frightening, but a comic figure as well, like a B-grade horror movie. The father is a creep, and an ogre, but he is gradually being disarmed. For me, a key point of light is the poem ‘There are not many Friends I can Talk to like this over a Continental Breakfast’: ‘We should write about other things, not just death, you say’, it begins, but by the end of the poem they agree:

one day someone
will ask us to contribute to

that death anthology we talked about.
Isn’t life wonderful.

Life is, and so is this collection. I strongly encourage you to pick it up, and any of Saphra’s earlier work. It’s available now for pre-order from Nine Arches Press, and will be published in September. Big thank you to Nine Arches for sending me an advance copy!