I took a bit of a reading holiday in August and spent a large part of the month re-reading old favourites, also just reading a bit less in general. Even with a longer list to pick from though, I’m pretty sure I still would have selected these three. This is not the first Patrick Gale to show up here, and I expect it won’t be the last, I finished reading everything by Sarah Waters sooner than I thought I would this year, and Gale seems to have become firmly established as my next backlist to complete. 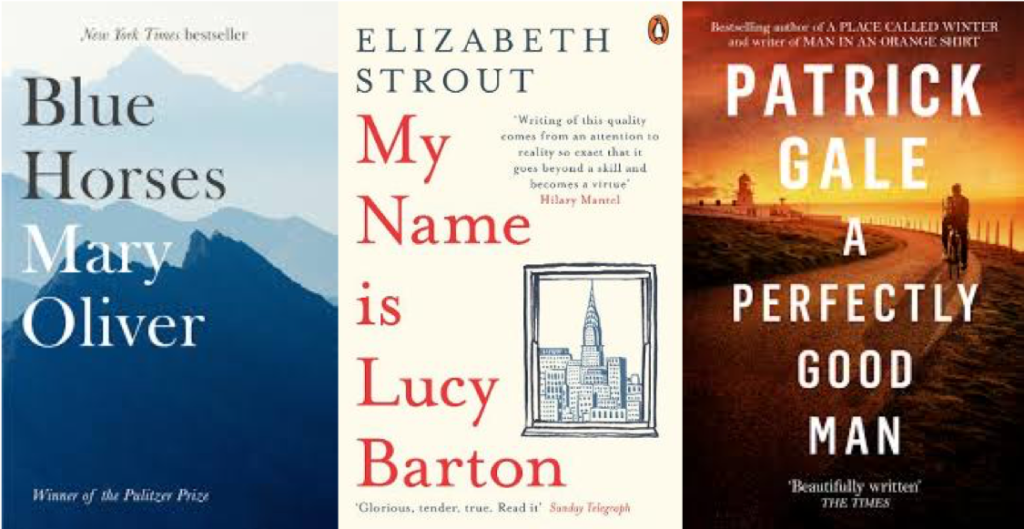 Best Poetry: Blue Horses, by Mary Oliver. It’s taken me a long time to get to Mary Oliver, in spite of numerous recommendations and a feeling of being pretty sure I’d love her work. Well, I did. I picked up this collection early this year, I finally read it and just wow. I find it hard to explain but the poems speak to me in such a way that I have to keep putting it down again. I’m trying to re-read it at the moment but keep stopping, it’s too good, too close.

I sat on the bench, waiting for something.
An angel, perhaps.
Or dancers with the legs of goats.

No, I didn’t see either. But only, I think, because
I didn’t stay long enough.

I want these poems so much and I think I feel sad and intimidated, and worried that I’ll never write this well. I hope that my writerly courage is a match for that feeling though, as I know I can gain so much from Oliver – it’s another backlist to get started on.

Best Fiction: My Name is Lucy Barton, by Elizabeth Strout. When I was reading Olive Kitteridge so many people asked me if I’d read Lucy that I had to make it my next read. I’m still team Olive. I loved this, but I wanted more – basically just a fatter book. After time passing, I feel I remember the characters and stories from Olive so much more clearly than Lucy, and I just felt a little short-changed by the sparseness of the writing. Still a wonderful book though, and if I wasn’t comparing it to Olive I might not have said that about it – I’m not against sparseness in general. There’s a sequel, apparently, and also a sequel to Olive being released later this year. Which will I read first??

Best Queer Read: A Perfectly Good Man, by Patrick Gale. As I mentioned, Gale has become a thing for me. I read Notes From an Exhibition a few years ago and really loved it, I’d always meant to read more but hadn’t until this year. I like reading about people who have a faith, especially non-clergy. It’s pretty rare these days, and very often happens in the context of questioning and/or escape from an oppressive kind of religion. I believe faith – with or without religion – is important, especially in the times we are faced with right now. As always in Gale’s work, the characterisation and family relationships in particular are wonderfully drawn, and I felt myself returning ‘home’ to my own small-town rural upbringing with all its secrets and gossip and entanglements. Highly recommended.

That’s it for August, I’ve already read two books I think are going to be on September’s list – I like it when it’s this easy! Let me know what you’ve been reading, whether you’ve read any of these, which PG I should read next.