When I first started writing, I thought I was going to write a novel. I began (as we often do) on January 1st, having selected a couple of useful books for Neil to wrap for me for Christmas. I hoped to finish a first draft by the end of the year, and it seemed sensible to not start on it straight away, but to get in some practice on shorter pieces, single scenes and so on. About a month in, I had written all sorts of random bits of prose, and done a lot of reading about plot arcs and character development and ‘show don’t tell’, and I decided to write a short story. It was awful. Not the story, because I never finished it – the experience. I could. not. do. it. Very shortly after that, I started writing poetry and discovered my home, and I loudly proclaimed that I wasn’t a storyteller and didn’t need to be.

Why then, did I decide to write short stories for the project? Well, some years have passed and I have found myself getting more and more interested in the crossover between poetry and very short fiction. I met two writers who became both friends and influences: Carrie Etter, who was first an established poet then started to publish short stories, and Tania Hershman who did the reverse. I was starting to explore longer poems and sequences and found that there was narrative creeping into a lot of my work. So, nervous as I was, I set the challenge for myself, and I’m really thrilled (you may have spotted) with how the project has gone.

Experience in poetry craft no doubt has helped, but the most important difference has been in how I approached my planning. I assume the plot arc/quartiles/peaks system works for a lot of people as it’s all over the internet, but I found myself hopelessly lost in it. Two things combined to completely change my approach: First, I discovered the work of Joseph Campbell (through reading Brene Brown) and got interested in the Hero journey and circular story patterns (plus geeking over all the folklore/fairytale bits), then more recently read Into the Woods by John Yorke (now you know why there’s no water in the picture up there), which covers similar theories but in a much clearer and up-to-date manner. Secondly, another writer friend recommended the three-point planning technique described here and I’ve found it invaluable.

Through John Yorke, I found myself in love with midpoints, and what really works for me is to figure out that point that the story revolves around and work out from there. It’s the point where the story changes. It usually involves a decision on the part of the protagonist, it often is a ‘point of no return’, it usually relates to the main character development of the protagonist. I am in love. Here’s one of my fairytale plans, with the midpoint in the central space. (Never open the box if you’re told not to.) 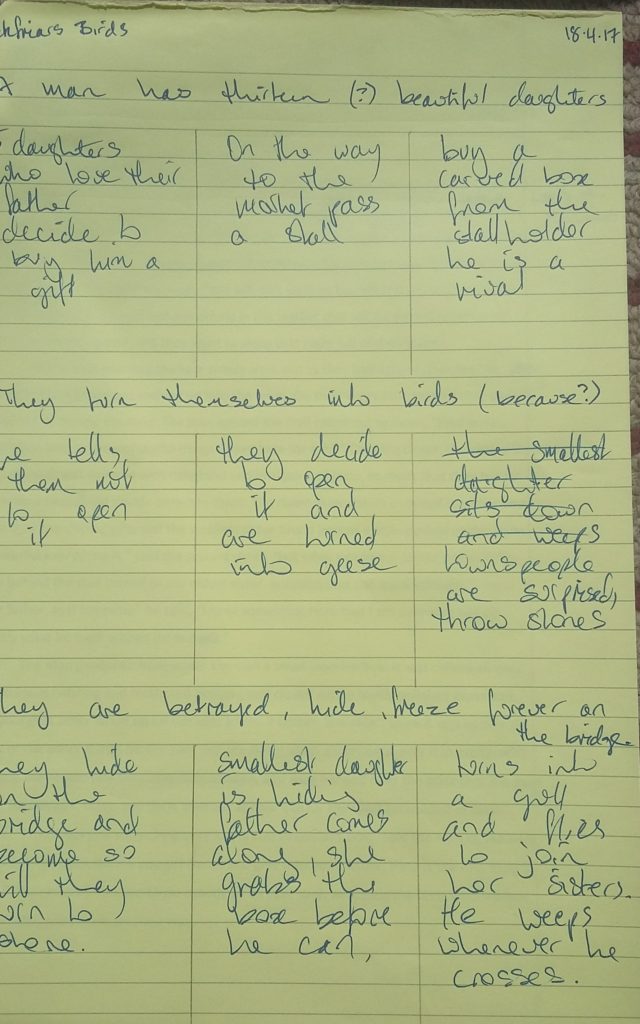 The midpoint in the first Harry Potter book is when Harry and Ron decide to go and warn Hermione about the troll – forging a lifelong friendship. The midpoint in Fellowship of the Ring is when Frodo volunteers to take the ring to Mordor, the midpoint of the whole trilogy is when Frodo spares Gollum’s life, sparking endless repercussions on the subsequent path. Pick up a novel and open it in the middle and I almost guarantee you will find some kind of midpoint.

This week I’ve been editing stories and writing the reflection that goes alongside the portfolio, which is why I find myself thinking again about all the above. I love the way the project work is designed to force us to reflect and analyse, every time I learn something about the way I write it makes my writing better.