June is Pride Month, and in London the Pride festival took place on July 6, so this post covers my reading up to that point. I read only books with LGBTQ+ authors or themes during the month, and although I did pick a top three, I thought I’d also share the rest of what I read, there were some really great reads, and several authors new to me.

Best Non-Fiction: Queer Intentions, by Amelia Abraham. This had just been released at the beginning of June, and I didn’t know much about it beyond an excerpt I’d read online. I found it really interesting. Abraham explores what queer culture is like right now, at a time when many countries have achieved equal rights for LGBTQ+ people in law. She points out that this law does not necessarily extend to practice, however, and we are seeing a rise across developed countries of right-wing ideas and governments. A lot is covered, from drag race conventions in America, to questions about assigning gender to children, to sex work in Amsterdam, and it’s probably fairly entry-level for people who know a lot about Queer culture already, but that was perfect for me, and I learned a lot. Abraham wraps up by discussing the ongoing tension between wanting to fit in and wanting to stand out that many queer people still find complex and challenging.

Best Poetry: Flèche, by Mary Jean Chan. Also just released, at the beginning of July, is the first collection from one of our finest early career poets. Chan writes beautifully about family, queerness, and the culture of her Hong Kong childhood. The title invokes both a French fencing term for attack, and the flesh of the body, and is the first of many examples of the constant tension and play in this collection. Chan’s relationship with her mother, who grew up under the turmoil of Mao’s regime, is a central theme; there is love from both sides, but difficulty in connecting, and at times cruelty. The daughter persists though; from ‘Tea Ceremony’: “I can only invite her // to the table: Look, Mother, your hands / are beautiful. Look, our tea is ready.” Chan ranges widely with voice, form and language, and almost every poem in the collection feels unique and compelling.

Best Novel: Take Nothing With You, by Patrick Gale. I really loved this, being, of course, an absolute sucker for a book with classical music in it. I had read one book by Gale previously (Notes From an Exhibition) and always meant to read more, now doubly so. This is a dual-timeline story, in which a middle-aged man undergoing a period of medical treatment reflects on his childhood. The title refers to the instructions he is to follow when he is isolated overnight for radiation treatment. The narratives aren’t balanced, far more of the book is devoted to his time as a teenager navigating his blossoming sexuality and his relationships with his family and various music teachers. I would have liked to have more of the present-day storyline, as it sometimes felt a bit added-on, or the main story could in fact have stood alone, as this was where really everything happened. That’s a minor quibble though, as overall I thought the writing was fantastic, the characters endearing, and the plotting well-tuned. And did I mention music? Such wonderful wonderful writing about music. You’ll want to take up the cello. 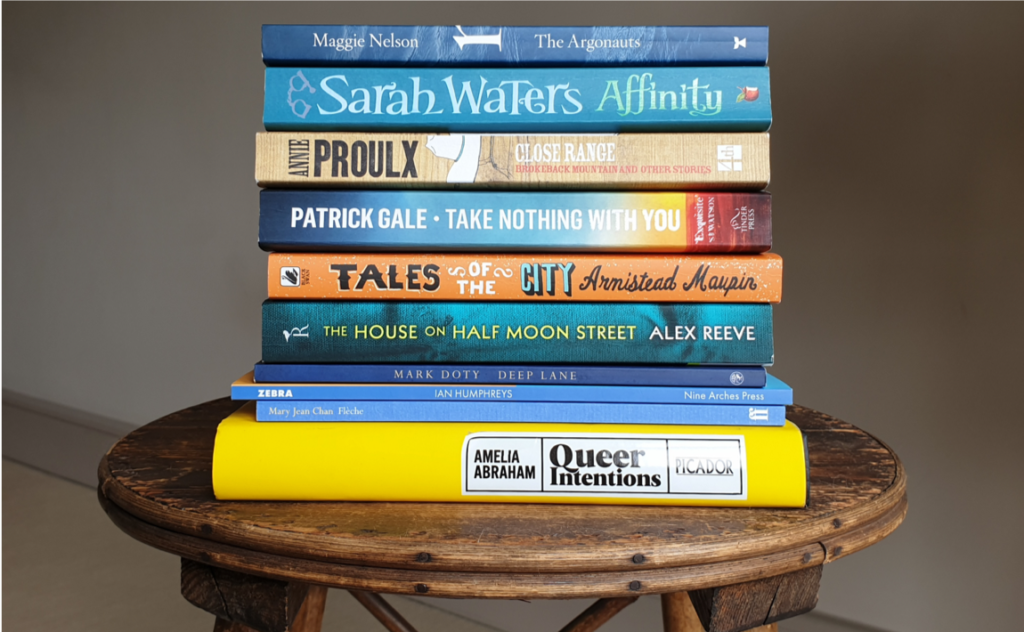 Zebra – New this year from Nine Arches Press, poems about queer coming-of-age in the 80s, mixed identities, and, of course, zebras. There’s great energy and movement in these poems.

Deep Lane – this was a re-read, and I didn’t enjoy it as much as the first time, I think I’m looking for something different in poetry at the moment. Many beautiful poems, with wonderful imagery of place. but sometimes I felt like I was being told the same story over again.

The House on Half Moon Street – I really loved this, it was a close fourth place. A Victorian detective novel set in London, with a trans man as the central (amateur) detective. I thought the trans rep was very well done, and the plot itself was as good as any I’ve read, and I was completely surprised at the end, which is exactly what I want from crime fiction.

Tales of the City – I hoovered this up in a day ahead of the release of the new series from Netflix, and loved it. Why can’t Michael be real? And be my best friend? I have the next one ready to take on holiday next week.

Close Range – This short story collection was tough, and I got to the end wishing I hadn’t persevered. It contains Brokeback Mountain, which I’d read before and love, but the rest of the stories were really hard reads – loads of violence, rape, abuse all the way through. Proulx is a genius writer, but it was too much to read them all in a row.

Affinity – Neither my most or least favourite Sarah Waters, I enjoyed it, and found some parts really intriguing, but it doesn’t hold a candle to TTV.

The Argonauts – bit cheeky popping this one on top of the pile, as I’m only 3/4 done, but I’ll take any chance to plug Maggie Nelson. Already on my top three list for next month.

Well that’s it, thanks for coming along for the long post! July’s list might be shorter as it lost a bit to this post, but I’m going to be on holiday for a week with loads of train journey time, so probably not, to be honest 🙂

Tell me if you’ve liked any of these, and what you’ve been reading lately. Dx