This was a shorter reading month as I extended Pride reading up until July 5th, but I still managed to add three books to my ‘almost certainly on my shortlist for the year’ pile. I also just started writing about the first book (it was The Night Watch, by Sarah Waters) and realised that it was the wrong book, I had to redo my covers image to put the right book in. So I guess that’s four books… 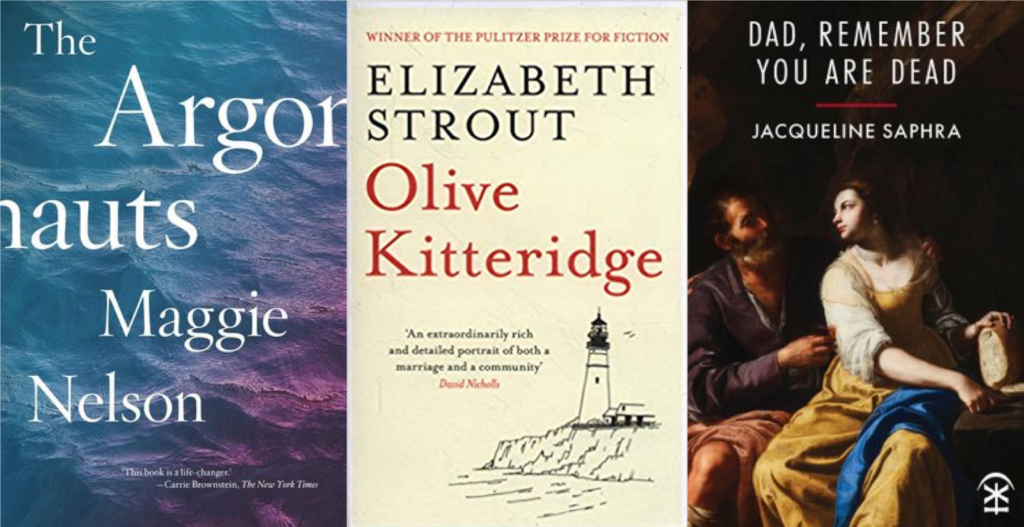 Best Queer Read: The Argonauts, by Maggie Nelson. I absolutely loved Bluets, and have been meaning to read this for years, so I picked it up in June. It was a slow read for me though, with complex ideas that I needed to let sink in slowly, so I didn’t finish it until last week. I also need to read it again, a lot of it just washed over me. It’s not easy to categorise Nelson’s writing, but I guess most would call this ‘personal essay’ although I filed Bluets on my poetry shelf and am now rethinking that – Argonauts is less poem-y than Bluets though. It follows two main threads: Nelson’s relationship with her gender-fluid partner Harry, and Nelson’s pregnancy and experiences of motherhood and step-motherhood. Just writing that feels so reductive though, it is so much more than it sounds. I’ve been flipping through the book, looking for a quote to include here, and I am breathless again at how extraordinary Nelson’s writing is. ‘During our first forays out as a couple, I blushed a lot, felt dizzy with my luck, unable to contain the nearly exploding fact that I’ve so obviously gotten everything I’d ever wanted, everything there was to get. […] The happiness police are going to come and arrest us if we go on this way Arrest us for our luck.’ Please do try it, or Bluets, either and both.

Best Novel: Olive Kitteridge, by Elizabeth Strout. This is my first Strout, and I feel a bit late to the party. A few months ago I did a writing workshop on character and we studied an excerpt of Olive, and I meant to read it ever since. It was half price at the station when I was heading to Glasgow last week, so I grabbed it. I absolutely loved it. Bam, top ten. To risk being reductive again, this book is about marriages, partnerships. There is every kind of possible relationship in it, from teen to elderly, people having or wanting affairs, people staying in bad relationships, people leaving good relationships. Strout understands and writes about people in a way that makes me want half to quit writing altogether, and half to work doubly, triply hard to try and get even somewhere close. It’s a novel made up of short stories and every story touches on Olive Kitteridge in some way, several are told from her perspective. She’s an incredible character, terribly flawed, and will break your heart. I’ve had lots of recommendations to read My Name is Lucy Barton next, and there’s a sequel to Olive coming out later this year, cannot wait.

Best Poetry: Dad, Remember You Are Dead, by Jacqueline Saphra. This collection is coming out in September. I requested a review copy as I love Saphra’s work, and it was, as anticipated, wonderful. It’s a companion collection to her previous one, All My Mad Mothers, which was shortlisted for the T.S. Eliot Prize, and I’m sure we’ll see it on similar prize lists. ‘After his flight, my faraway father / sent me a giant pigeon because / you do love pigeons, he said. // But why was Pigeon broken / in half, body on one side / of the canvas, legs on the other?’ I’ll be writing a proper, detailed review soon, so won’t say any more here, but do put it on your list for later.

Well, that’s it for this month. I just found out that August is Women in Translation month, so I might direct my reading that way a bit, I haven’t been reading as many translated books as I want to this year, so it might give me a boost.

What have you been reading? Have you read any of the above? Favourite translated authors??